Read about what's been happening with the National Lumber Family of Companies.

Kim Salvo-Conlon has more than 20 years of experience in Millwork Commercial Sales and has earned Fire Door Assembly Inspector (FDHI) and Door & Hardware Technician (DHT) certification through the Door & Hardware Institute (DHI). She joins us after successfully establishing the Commercial Door Division for Merrimack Building Supply, which was purchased in January 2021 by L&W Supply/ABC Corp.

Kim Salvo-Conlon is currently the DHI New England Chapter President. Under her leadership an “Industry Awareness Program” is being developed to be presented to Vocational Schools in Massachusetts to attract younger people into our industry. National is excited about what Kim will bring to the division. 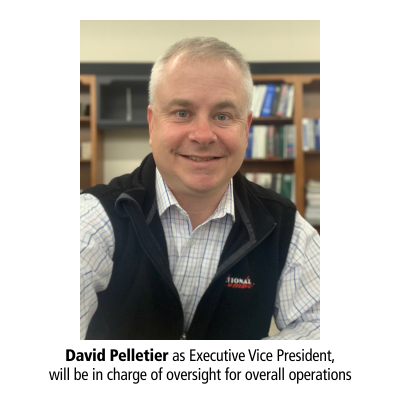 Effective January 1, 2021 – Continuing a tradition of promoting from within the company, National Lumber has proudly announced the promotion of David Pelletier to Executive Vice President, with oversight of overall operations of the company as well as the inside sales support team. He will report directly to company President Manny Pina.

David Pelletier started with National Lumber as the Vice President of the Installed Sales and Drywall Divisions after the company acquired his operation, Pelletier’s Building Supply, in 2009. Over the first few years, Pelletier also developed sales in the North Central Region of Massachusetts and managed their Gardner and Berlin locations.

In 2015, his role expanded as he was promoted to Vice President of Operations overseeing the operations of all lumberyard locations in Massachusetts and Rhode Island.

In 2018, Pelletier was promoted to Senior Vice President of Operations and spearheaded the company’s ERP conversion to BisTrack™ in the same year. 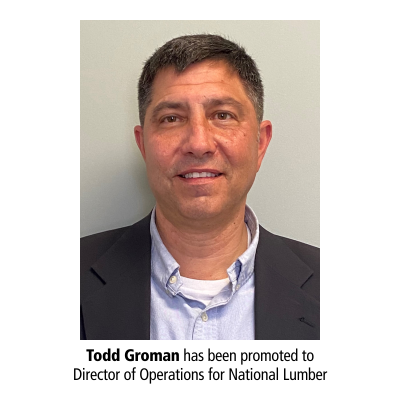 Groman is a thirty-year veteran of the building materials industry. With National Lumber since 2015 in a variety of management roles, Groman has overseen National Millwork, Benjamin Moore Paint, and Operations.

His vast experience comes from having spent half of his career in manufacturing / distribution / wholesale and the other half in retail throughout the Eastern Seaboard, the South, and Midwest. Groman has started distribution centers, sales territories, and new lumberyards in several capacities as General and Regional Manager, entrepreneur, and broker. He earned a Bachelor of Science in Finance from Northeastern University and an MBA from University of New Hampshire in 2002. 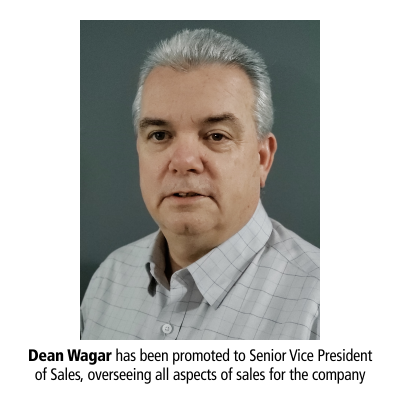 Effective January 1, 2021 – Continuing a tradition of promoting from within the company, National Lumber has proudly announced the promotion of Dean Wagar to Senior Vice President of Sales, overseeing all aspects of sales for the company; reporting directly to company President Manny Pina.

Dean Wagar joined National Lumber in 2001 as Sales Manager and for the past 15 years he has held the position of Vice President of Sales responsible for the north territory. His focus has been to build a knowledgeable sales force with a team concept that focuses on the many building solutions the National Lumber Family of Companies offers to its customers. Wagar began his career in the building materials supply industry in 1986 as a manager trainee at Grossman’s, learning the business from the ground up, becoming a store manager in 1990, and going on to manage several locations throughout the Northeast. He then became General Manager for an independent lumberyard in Vermont; and moved to Illinois when he joined Wickes Lumber in 1998 as General Manager. 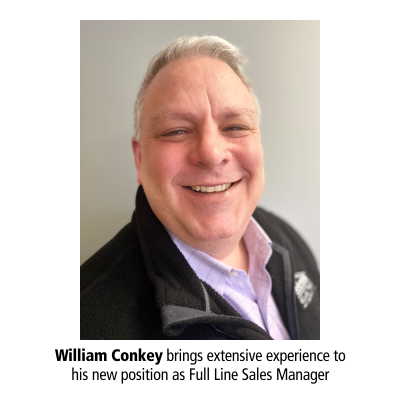 William Conkey brings extensive experience to his new position as Full Line Sales Manager. He has been in the building materials industry his entire life, starting with his parents' retail lumberyard in Belchertown, which included a sawmill for their own pine boards and timbers.

In addition to working from 8-4 at Conkey Lumber over summers during high school and college, he worked part-time, second shift 5-10 at Universal Forest Products (UFP) loading trucks, unloading cars, building trusses, and treating lumber. He also became an EMT for the on-call town ambulance and served as EMT for campus events.

Conkey graduated in 1994 from the Building Materials Management and Technology program at UMass. Universal Forest Products, now known as UFP Industries, hired him as a trainee where he quickly progressed as a Production Manager in NC, to inside sales in PA, to outside sales in MA, and finally Plant Manager in MA for over 5 years. Conkey then worked for Russin Lumber for about 7 years starting in wholesale outside sales across New England, then changed to outside sales for a wide variety of specialty products. He spent the next 7 years with Koopman Lumber as Inside Sales Manager.

Since 2016, Conkey has been with National Lumber as Specialty Sales Manager overseeing the millwork and component sales teams. 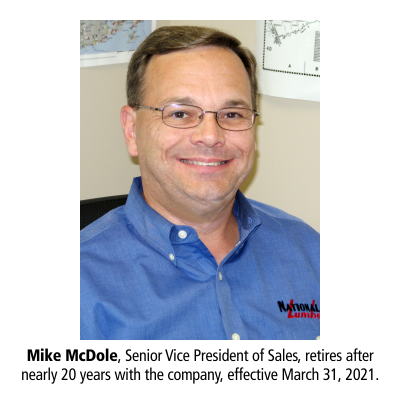 Mansfield, MA – February 11, 2021 – National Lumber, announces the retirement of Michael McDole, Senior Vice President of Sales, effective March 31, 2021, after nearly 20 years with the company. Until then, he is helping with the transition. McDole joined National Lumber in 2001 as Sales Manager responsible for the territory of southern Massachusetts and Rhode Island. He was promoted to VP of Sales in 2007, responsible for outside sales eastern and southern coast region.

McDole was a driving force behind National’s expansion into Rhode Island, with the 2010 opening of the location in Warwick. McDole lives in Narragansett, Rhode Island and has been in the building materials business since 1983. He initially worked for 84 Lumber, and then moved to JT’s Lumber in RI where he worked his way up to Vice President/General Manager. He left JT’s in 2000 to start up the Building Supply Channel, Inc. with industry veteran, Greg Brooks. National Lumber uses BSCi Pro as part of their very extensive employee training. 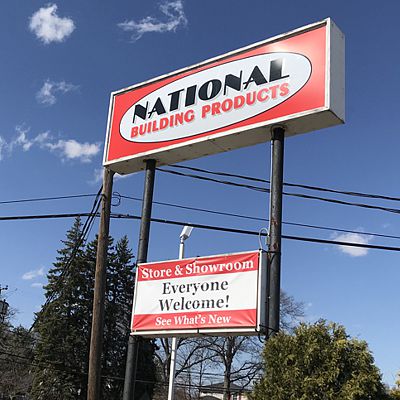 Mansfield, MA – June 7, 2019 – The National Lumber Family of Companies is pleased to announce the Grand Opening celebration for the public June 21-22 at our newest location, National Building Products in East Hartford, CT.

Everyone Welcome! There will be special sales offerings with free coffee and donuts being served. There will be kitchen designers available to answer questions as people browse through the new showroom.

The location is overseen by General Manager Mark Lefsyk, and many of the employees have worked at this location under other owners in the past. Their experience with providing building materials in the area is helping us make a smoother transition into this new location.

In addition to an array of improvements to the full-service lumberyard, with expanded products offerings in both the lumberyard and hardware store, the renovated East Hartford location also contains a Kitchen Views design showroom that also contains millwork products. 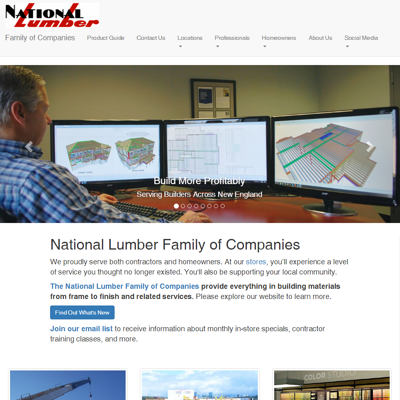 Mansfield, MA – March 7, 2019 – National Lumber is pleased to invite everyone to explore our new responsive website, which is mobile-friendly. Whether you prefer to use a desktop computer, tablet, or smartphone, the website will respond to the page size of the device used.

Navigation has been streamlined to accommodate mobile devices, and the new layout has thumbnail sections that are three across on a desktop or laptop screen. When seen on a smartphone, the thumbnail sections stack for easy scrolling down the page.

Any website is never really finished, and more depth will be added to various sections over the next few weeks. So you are invited to take a look now, and then check back in a few weeks to see what has been added.

Questions or feedback on the new design can be sent using our Contact Form.

Thank you for your interest in the National Lumber Family of Companies.

Since joining National Lumber in November 2010, Mike has been with the Turn-Key Framing division, starting as Project Manager, then Senior Project Manager.

Mike has been instrumental in serving developers, owners, and builders who specialize in large wood frame projects, such as hotels and motels, multi-unit residential facilities, and other large commercial projects. We now cover the Northeast, Mid-Atlantic, Southeast, and California. 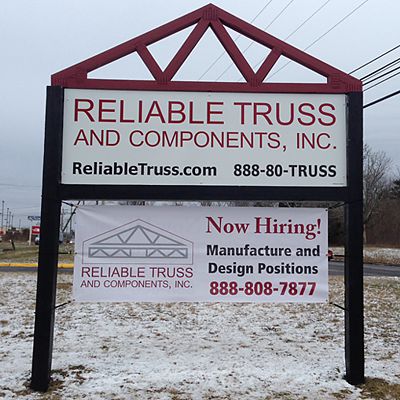 A new lumberyard also opened in January 2019. National Building Products in East Hartford, CT is at the site previously occupied by Builders First Source on Route 5, between I-291 to the north and I-84 to the south.

We've been busy restocking the lumberyard and store with the quality brands we trust to meet your needs. We're also adding a Kitchen Views showroom staffed by an experienced cabinetry specialist.

Back to Home page